I have been involved in alterations to a Grade I Listed building in East Sussex since July last year. The work involved recording fabric before, during and after the alterations in addition to providing advice on ways to best protect the building while managing change. I had the final visit on Tuesday this week, 11 months after the project began. I am very pleased to report that the results are incredible! I stress that this is not a comment on the fitted kitchen or the tastes of the individuals that commissioned or designed the fixtures; this is a comment on the survival of the historic features of a complex building and a testament to the builders that carried out the work.

I re-visited each part of the building that was altered, every single recommendation was taken on board, much of the detail that was visible during the first visit to the property, including lath-marks and nail holes on joists remain extant. Any new fabric, in this case both masonry and timber are beautifully pieced in and remain ‘honest’ creating a continuum, a new phase in the c. 500 year history of this building.

We always stress the importance of allowing a building to remain ‘readable’; that each phase of alteration should be represented as far as is possible allowing the origins and sometimes complicated sequence of development of a building to be evident. We acknowledge and try to find ways to manage change to these buildings, safeguarding their future while creating a manageable and modern environment for the present occupants. For me, this site is a success: a modern and large (but probably not by today’s standards) kitchen and dining room has been created out of several formerly separate rooms that provided evidence for a sequence of development starting in the 16th century, modified in the 18th century and ‘tweaked’ at the turn of the 20th century. Evidence for the timber framed partition walls that had separated the rooms is retained, the 18th century wall is indicated by its head beam, joist terminals and referred to by clearly identifiable modern posts, while the 16th century wall line is retained in situ in its principal elements, with laths removed to open up the area. The doorway in this earlier wall is retained in situ, the rebate on one side, mitre on the other,, iron pintles and door furniture are retained, as is the door itself. In this way, plan form, both original to this part of the building and historic alterations are indicated or retained in place.

From this it is clear that much of the evidence is still there, some sensitively altered and where loss has occurred it has been preserved by record. Where repairs were undertaken, additional detail has been unearthed to enhance the record. For example, a pair of bread-ovens were located that had flanked the original kitchen fireplace, one of which had been cut flush with the wall at the back and rendered over. Within the fireplace, the fronts of the ovens had been converted to small cupboards and their presence unconfirmed until this work was carried out.

It should also be noted that some of the work allowed access to parts of the building less sensitively or even adequately altered in the previous periods of its history. This provided an opportunity to recognise areas that were about to fail structurally and as such instigate programmes of repairs that in themselves will safeguard the future of this house for several centuries to come.

The project would not have been such a success with the guidance and participation of Diane Aldridge (Planning Consultant) and the quality of the work carried out by Roger Moore (Builder) and his team. Roger is responsible for the exceptional standard of work on the property, his knowledge of materials, methodology and application is exactly what you would want on a building as significant as this one and he is very willing to discuss requirements and make recommendations.

I cannot recommend Diane or Roger enough. Email me at info@buildings-archaeology if you would like Roger or Diane’s contact details. Roger is booked for the foreseeable future, as he should be, but will respond to all who contact him and schedule in what he can! 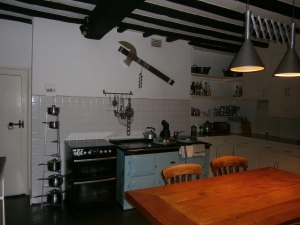 The kitchen (now dining room) wall prior to building works 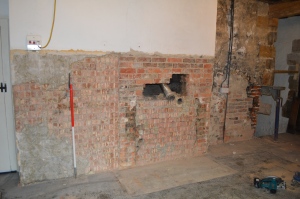 The kitchen (now dining room) wall after plaster removal – blocked fireplace, rebuilt end and in the distance, former bread oven with its back removed, cut flush with the wall line and plastered over 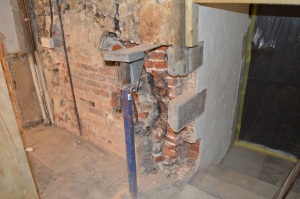 Detail of the under-mined quoin, damage caused by the historic insertion and subsequent removal of the bread oven 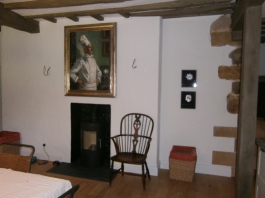 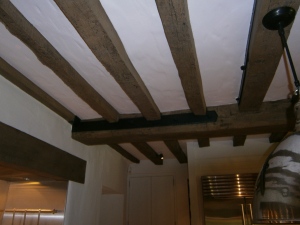 16th century ceiling in the new kitchen. Honest (and essential) repairs to the girder which were brought about by damage caused by the 18th century addition of a brick chimney stack. Lath marks and nail holes remain extant on the joists indicating that an under-plastered ceiling of lath and plaster construction had been historically removed